First, let me thank you all again. Montalban, Rizal is looking so much better. However, many roads are still covered in mud and the stench is terrible. More and more people fall ill with infections from the contaminated mud. Our priority here is to clean all roads and continue medical missions to diagnose people early before illnesses become too severe.

Barangay Captain Roger Frias has designated a large piece of government land for resettlement. The plot of land is at least 10 hectares and free from danger of flooding or landslides. We are currently leveling the ground of the area and planning the construction of the houses.

We STILL need your help, though! Hundreds of thousands of people in Manila continue to live in flooded areas, trying to survive on rooftops. Because toilets are inoperable in these areas, human waste goes straight into the floodwaters, where children swim and people walk through to make their way to work or their daily chores. The contaminated water has made leptospirosis rampant and other waterborne diseases have also emerged. This has been going on for over four weeks now. The government has made little progress to evacuate all these people to safer ground. The only evacuation centers available are schools, many of which are also flooded. Schools have been reopened by Presidential decree and now both schoolchildren and evacuees are trying to get through the day together.

Diseases are bound to spread like wildfire should the current situation continue. This is a catastrophe of unprecedented proportions in the Philippines, which has the potential to spiral out of control very quickly.

In other areas where the flooding has receded, villages are still covered in mud and people have to wade through it to get to their houses. The army should be there clearing the streets. But where are they?

Springboard feels overwhelmed with the vastness of the disaster that has struck Manila and other parts of the Philippines these past few weeks.

We do not have the resources to prevent a major catastrophe. We are trying to help where we can but unless we evacuate these hundreds of thousands of people, diseases will spread like wildfire and so many lives will be lost. Children are falling off roofs and drowning in the floodwaters while their exhausted parents are asleep, only to wake up later to find their children gone. We have over 7,000 reported leptospirosis cases (please see the DOH website for the latest updates: (http://portal.doh.gov.ph/node/2476) and the number is rising. Doctors are weeping because they only have one dialysis machine available per 100 patients. Cholera has unofficially been reported but the government is not acknowledging it.

The Manila area had more rainfall in a few hours from Ketsana than what would normally be seen during the entire month of September: 41 cm of rain fell in less than nine hours, flooding 80% of Manila. Laguna de Bay, a vast freshwater lake adjacent to Manila, rose by three meters because of the storm and its water level is receding at an extremely slow rate, only 5 cm/week. Hundreds of thousands of people are trying to survive on rooftops but the walls of their houses are weakening and the roofs are rusting quickly.

Human error contributed to the severity of the after-effects of Ketsana primarily because of faulty urban planning and the lack of recognition that the poor have a right to a decent living area. The poor in the Philippines are seen as cheep labor and are not given adequate living space. Now the government blames them for living near the flood plain and waterways, which is the only land where they could settle undisturbed. Land that is valuable and safe has never been accessible to the poor. Moreover, the government has not organized proper garbage disposal nor adequate sewage facilities and is now putting all the blame on the people who have never been educated enough to organize these issues on their own.

It is not impossible to fix this situation. Engineers have assured me that they can drain the lake by providing access to Manila Bay. However, the government has no political will to do so. Because they have also ignored the issues of pollution in Laguna de Bay, they do not want to redirect that water into Manila Bay. These longer-term problems will need careful consideration but, in the meantime, people in the flooded areas cannot be left to fend for themselves. Government land is available in the Manila area for the relocation of the affected populations but the government wants to use it for other projects and not designate it to the poor, even temporarily. The plan of the government is to resettle these people in places 80km out of Manila where there is no chance of employment. This is what they have always done. In the past, they have resettled them in natural flood basins and other areas of no value to land developers. Now the poor pay the price. The rich sit in their extravagant homes in safe areas and watch the tragedy unfold or are completely ignorant about what is happening around them.

Please do not say the poor do not know any better, or they do not feel the same pain about losing a loved one or seeing them sick as we do. They do!!! There is nothing that makes losing a loved one easier when you are poor. The suffering is the same.

Springboard Foundation is small; we raise about 100,000 USD a year and support projects that help improve the lives of children in the Philippines. We could do much more but it is not easy to raise the money to finance our projects.

It breaks our hearts to see what is going on here right now and to know it is going to get so much worse in a short time-frame.

If you could look into the possibility of helping these people, we would greatly appreciate it. Hospitals are full already and doctors have no choice but to send patients home, even those diagnosed with leptospirosis or are still ill with other conditions. Please help us to convince the government to evacuate these people as soon as possible. They will not listen to a little foundation such as Springboard, but if it comes from many, they have to act on it and the people will have a chance to survive. Or, alternatively, please donate to our cause so we can help more people here on the local front. 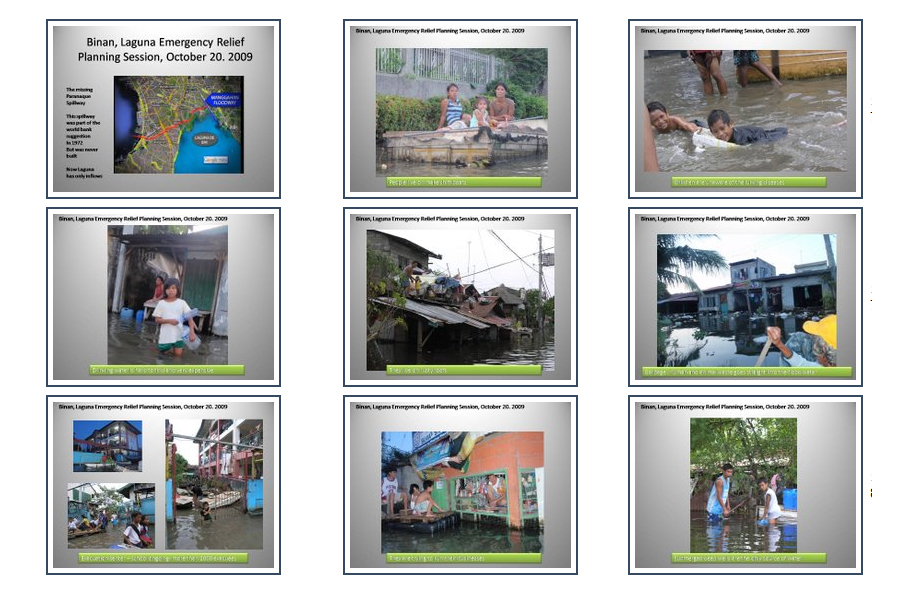