It has been a busy couple of weeks in Lower Bantigie and Daanbantayan in Northern Cebu, with different groups of volunteers arriving on different days, working on different projects and collaborating on others yet all working towards the same goal of helping the community affected by Typhoon Yolanda. We had volunteers from the British School Manila and from the Garden International School, Malaysia, volunteering with painting houses, classrooms, running lessons at the local school, digging vegetable patches and distributing school supplies and sports equipment 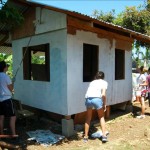 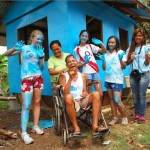 The father was in a motorcycle crash that has left him with brain damage and limited movement, so his house has been built to allow wheelchair access

The same group returned the next day to finish what they had started the day before. The family will build a wall around the bottom of the home to help protect against the elements. In time they hope to build a path that will help making the area more wheelchair friendly.

The first contingent of volunteers from the British School Manila consisted of 9 elementary students and their parents. Unfortunately, they experienced a flat tire on their way to Lower Bantigie, which reduced the precious little time they had to get stuck in with painting houses. Flat tires aside, the little ones, despite their size and their now limited time onsite, managed to paint a good portion of the blue over coating on the house they were painting onsite, instinctively choosing rollers over paint brushes, painting everything that they could reach. A job that the rest of the older BSM students would finish (more on them later). The little ones then went over to the local school to distribute 60 bags of school supplies to the local students that were so kindly donated. 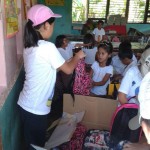 The first contingent of volunteers from the British School Manila distribute school supplies to a local school. 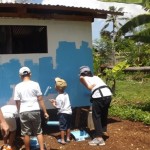 A very important task in itself as it helps to protect the houses from the elements, especially as we are in the midst of the rainy season. The houses identified first needed an undercoat of white and then an overcoat of sky blue paint, this is where the collaboration between the two schools was invaluable, without it, I personally feel that not as many houses would have been completed. The British School laying the ground work with Garden International picking up what the British School could not complete.

The two schools had different approaches to painting the houses both of which cannot be faulted. The British School went for the option of fewer students on more houses whilst Garden International went for more students on fewer houses. The results were the same, houses got painted, I got a lot of exercise couriering paint between sites and large numbers of volunteers caked in paint. Numbers wise (all numbers have been collated together to reflect the joint effort of the schools. If you want to know ‘Who painted the most houses?’ the answer is, ‘They both did’. ), 25 houses were identified for painting, 22 of which needed an undercoat and blue overcoat, whilst 3 just needed the blue overcoat. After our army of painters had finished, 23 houses had been completed, both undercoated and overcoated. The figure would have been 100% but due to factors beyond our technical knowhow, these two houses have to be referred to the professionals.

I am sure if you asked which school worked the hardest, each school would say they did, if you ask me, both schools far exceeded my expectations. Their strong work ethic and dedication to completing the project was impressive. 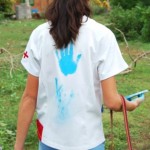 A volunteer carrying supplies at the end of the day 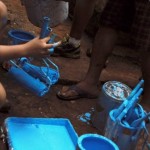 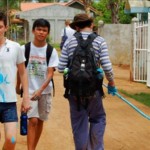 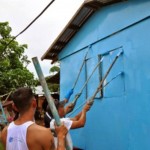 An army of brushes on sticks to get those hard to reach places. 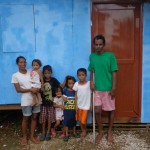 A family stands outside their completed house. The father of the family, despite having limited movement in his legs, completed the majority of the building work on his home by himself. The volunteers from the two schools aided with the painting and digging of a vegetable patch.

Awhile back a vegetable growing livelihood project was implemented. The first seedbed has successfully taken root and the first batch of seedlings have been distributed amongst the benefices and planted in their own patches. The plants have taken well to the soil of Bantigie. GIS have spent some of their time cultivating the land for the second wave of vegetable patches to aid this ongoing programme.

The soil in Lower Bantigie varies quiet considerably from place to place; in some areas the ground is so rocky that soil will need to be brought in from other sites to establish raised vegetable patches to easy to manage loose soil. The volunteers from GIS experienced an eclectic range of digging conditions on the four different sites that they worked on. One site measuring 3X4 meters, had a tremendous boulder in the middle, two sites with reasonably easy to cultivate soil with the final site being home to a colony of continuously biting red ants. 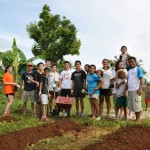 A completed vegetable patch. To cultivate the land, large rocks and vegetation have to be removed and then the soil is used to make raised beds that are ready for planting. 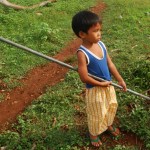 Always good to have a helping hand.

Working in shifts (one group digging, two groups painting houses) the students managed to overcome whatever the ground threw at them. In total, they cultivated the land in four different sites, creating 7 vegetable patches on three of the sites that are ready for seedlings.

As part of their time in the Philippines, the Garden School also took time to help the Central School in Daanbantayan. It was a chance for them to experience schooling in the Philippines and to apply their newly acquired house painting skills to the classroom. The two classrooms the Garden School painted have recently been renovated after damage sustained by Typhoon Yolanda. With help from some of the students from the Central School, the painting of the interior and exterior of the classrooms were completed in good time, coupled with the donation of new blackboards from the Garden School. The transformation to the learning environment was amazing. 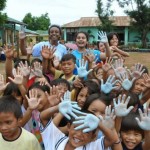 The majority were involved in the painting at the Central School in Daanbantayan whilst some students just opted to have blue hands. 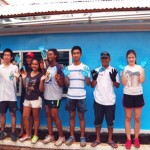 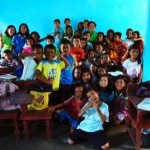 Teacher and students inside their newly completed classroom.

Whilst one group painted, the other two groups ran activities with the students before swapping over to paint duty. The students ran classes to help the students of Central School with their conversational English; they also ran P.E classes in the main courtyard of the school to give the students a break from academia. The organizer of the trip, Beth Walters said, “it was a really fulfilling experience for our students and they really enjoyed how happy and enthusiastic all the students were” 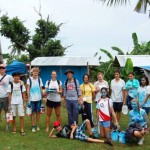 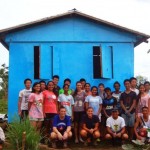