We are at the start of an exciting new project in Daanbantayan, Northern Cebu! Working closely with Mad Dog Motorcycle Club, Pacana Engineering Works Inc. and the Philippine government, 40 Jetmatic hand pump wells will be installed at different Barangays throughout Daanbantayan.  The aim of the project is to improve access to safe, reliable water. In some areas this will involve drilling new wells whilst at others it means upgrading the current wells. All wells are to be fully accessible to the public. So if you are ever in the area and in need of some water, you can head on over to any of the pumps and help yourself to some refreshing water. Everyone has the right to safe drinking water.

I asked Steve Ayless, President of Mad Dog Motorcycle Club about how they got involved with this project. This is what he said,

“Like most, the Mad Dog Motorcycle Club Members were horrified by the devastating destruction caused by Typhoon Yolanda. We immediately proceeded to send some Emergency Relief Goods down to the affected areas, but had the intention to also do something more permanent.

We set about raising donations via Social Media, with the hope of raising enough to make a significant impact.

Having already been providing water wells to local communities in the Pampanga area, it seemed like this might be a good option for one of the areas affected by Yolanda. After a few discussions with Springboard, we agreed on the Daanbantayan area in Cebu.”

Steve Ayles (pictured) with members of Mad Dog Motorcycle Club. Who raised 800’000 Pesos for this project through the use of social media.

Springboard would personally like to thank Steve Ayles from Mad Dogs for his hard work and to Mad Dogs as a whole for providing 800’000 Pesos to build/upgrade 40 wells. We would also like to thank Pacana Engineering works Inc for taking on this project and the Philippine government for identifying the different well sites.

We meet the Barangay captain of Tapilon. He apologizes that he cannot show us the sites as he has a meeting to attend, so he dispatches one of his colleagues to show us the proposed sites. There are five sites for the wells in Tapilon alone.

We follow our guide along very narrow paths within this densely populated area, to a tiny opening amongst the houses. This will be the site of the first well. A very informal ground breaking ceremony occurred to celebrate the start of this grand project. Blinked and you would have missed it. Ben Panaca, the chief engineer, beaconed everyone over, words spoken, a stick hastily bashed onto the ground with a rock, “this is the site of the first well”, he says, getting everyone to point at the stick, tap, tap, tap. “Smile” I say, click, the ground breaking ceremony captured in its entirety. Once the well is completed, it will be used by up to 100 households.   The second proposed well site is about 300 meters away in an equally populated area. The other 3 well sites in Tapilon are literally off the beaten track. Bumpy dirt roads with curve new routes through fields as trees felled by Yolanda still block the original routes. The sitios up here are sparsely populated and spread far and wide, with some having to walk over 1km to access safe drinking water.

As we visited the different sites in Tapilon, Ben was telling me about the importance of wells, of how after a storm, you can live for months without electricity, weeks without shelter but only days without waters and to use his words “water is life”. A phrase I heard repeated a number of times that day. 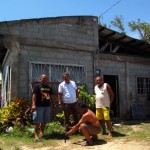 breaking ceremony in Sitio Congo, Tapilon. The site of the first well 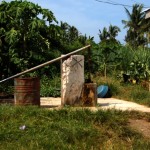 Not just wells from scratch. Existing wells will be upgraded. This well is brackish and running dry 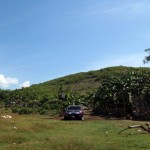 Some sites are up in the hills and are sparsely populated. Like here in Sitio Looc, Tapilon.

The next few days, I go on the sites visits with a representative from the government in Daanbantayan called Joven. We visit the sites using the municipal hall’s work van. Driving around, I notice that I can watch the road go by through the floor of the van whilst Joven relentlessly struggles to keep the wing mirror pointing in the right direction whilst instinctively honking a long silent horn. Money is tight. Joven and I, call into the various Barangay halls of Bagay, Bakhawan, Bitoon and Paypay.   We were just about to visit Paypay Barangay, only to find a seminar on sanitation being held in the courtyard, so we move on to the next Barangay. Each Barangay have their problems regarding access to water. Some wells the water is ‘parat’ (Bisayan for bad/salty water), other sites the water is ‘lami’ (good water) but the well is exposed to potential contamination. One Barangay’s wells have electric pumps but these are rendered useless whenever there is a Brownout, effectively cutting the community off from any water, whilst other sites they have to walk over 1km to access clean drinking water. 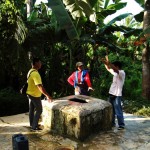 The well site in Dalingding. 160 homes would be affected if the well became contaminated. 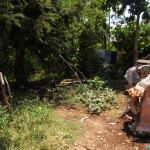 Site in Site Kalubisan for a new well. The closest well is over 100m away…downhill. 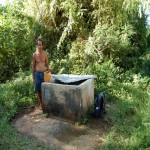 A resident in Sitio Sambag, stands in front of a fresh water. The only protection from the elements this well has is a thin sheet of weathered plyboard. 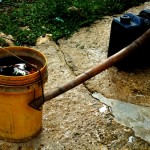 A water carrying device of an elderly lady in Dalingding

The final site visit was in a picturesque mountain Barangay with the most amazing name to read aloud, Dalingding. There are round 160 households in this spread out mountain community all having to share the one public well. The water is refreshing and safe to drink, as the well is feed by a natural spring but it is an open well.   If the well was contaminated, the whole community would have to trek to the next Barangay to use their well for drinking water. If that were to happen, that would make 240 households dependent on one water source. It makes you realize how important these wells are to the community.

Whilst I was on my travels with Joven, work had started at three well sites in Tapilon. Before leaving Daanbantayan, I had a chance to revisit the first sites to see the progress and to get an idea to the techniques involved. See the accompanying photos for more details. 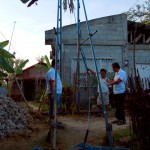 The drill rigs set up in Sitios Cogon and Sta. Cruz, Tapilon. The rope is pulled tight, which lifts the driver high above the ground 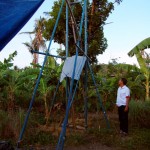 The rope is then released, which breaks up the ground. This process is repeated to usually a depth of 20 feet. Pipes and a pump are then and sealed to prevent contamination

In all, due to the spread of the sites and the difficulty in accessing some of the sites, I only managed to visit 19 of the 40 sites. I shall be returning next week to visit the remaining sites, so watch this space!

In the meantime, click the link below to explore the map of the proposed wells and to get a bit more background on some of the sites and to get an idea to the scale of the project.